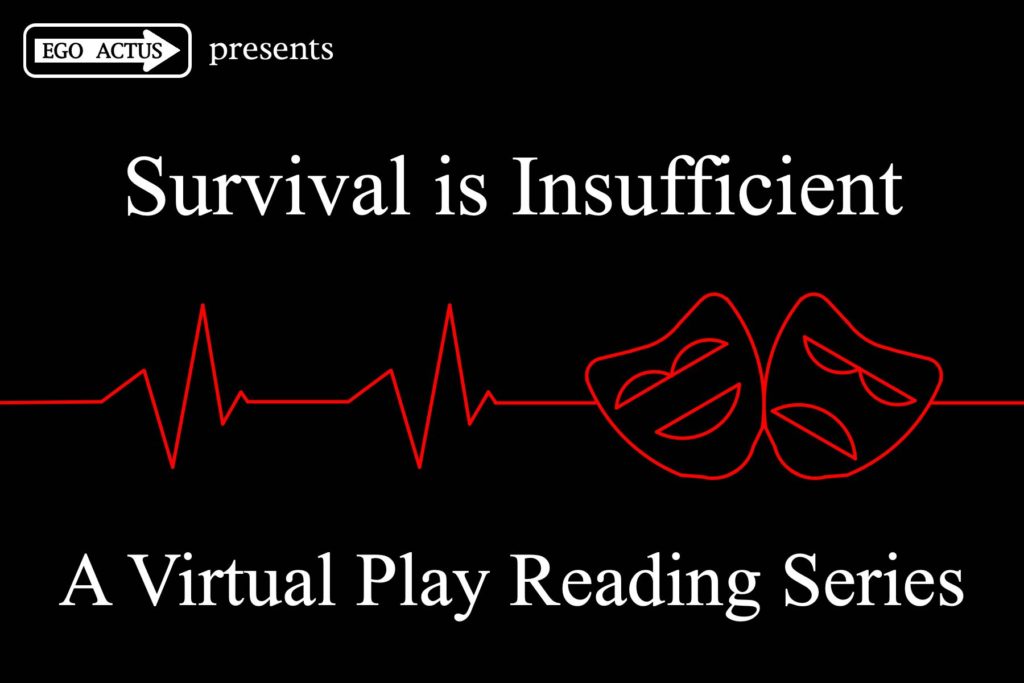 The live 10-play series from the award-winning international production company Ego Actus will run Tuesdays at 7PM/ET through December. There will be no performance on Election Day, November 3.

Gary Morgenstein’s drama Saving Stan, a love story about passion friendship and suicide, will kick off the new Survival is Insufficient Zoom Theater reading series on Tuesday, October 6 at 7PM.

In Saving Stan, Stan Nagel, a rich 60ish lawyer, suffers a stroke and can’t talk. His best friend Jack Sanders, a 60ish failed writer, somehow hears him and believes Stan is asking for help to commit suicide in exchange for getting his estate. The third character, 40-something lonely Patrice Doner, the live-in health care aide, grows suspicious of Jack’s intentions while falling in love with Stan, with whom only she can dance. Who will Save Stan?

To RSVP, please go to https://us02web.zoom.us/meeting/register/tZUlcOytqD0iGtDFHi4nuiTRa5VkL-nVavzG

Gary Morgenstein (playwright) is the author of the funny new drama about racial harmony, A Black and White Cookie, directed by Joan Kane and produced by Ego Actus, which is scheduled to open at the Theater for the New City post-lockdown. His other works include A Tomato Can’t Grow in the Bronx about a 1960s Bronx Jewish family’s search for the American Dream. Morgenstein is the author of six novels including the critically acclaimed dystopian sci-fi baseball book A Mound Over Hell, which has been hailed as “1984 Meets Shoeless Joe.” His new novel A Fastball for Freedom will be published in 2021. https://www.bhcpress.com/Books_Morgenstein_A_Mound_Over_Hell.html

Joan Kane (director) is the founding Artistic Director of Ego Actus and directed Sycorax at HERE, Play Nice! at 59e59 theaters, I Know What Boys Want at Theatre Row, Six Characters in Search of an Author in Oslo, Norway and Kafka’s Belinda in Prague. She also directed both Safe and what do you mean at 59e59 theaters and in the Edinburgh Festival Fringe. Joan was named Best Director in the 2016 United Solo Festival and is in the nytheatre.com Indie Theatre Hall of Fame. Joan has an MFA in Directing and MS in Museum Education. She is a member of NY Madness, the Dramatists Guild, Society of Stage Directors and Choreographers and New York Women in Film and Television. Please see www.EgoActus.com and JoanKane.us

Frances McGarry* (Patrice Doner) Ph.D. is an actor, arts advocate activist, theatre educator and podcast host of First Online With Fran featuring ordinary people doing extraordinary things in the arts. She recently performed in a Zoom staged reading of A Tomato Can’t Grow in the Bronx by Gary Morgenstein and was cast in a Hallmark TV movie that airs Christmas 2020. Member of LPTW & NYWIFT. Represented by BMG. Please see her sites www.FirstOnlineWithFran.com and www.FrancesMcGarry.com

Carlo Fiorletta * (Stan Nagel) is a Queens College CUNY graduate. Stage: Robert in Proof, Sal in Those the River Keeps, Kaplan in Bogosity.  Film: Detours an Action on Film Festival best film and Surviving Family both are on Amazon Prime and Tubi. TV: Multiple dramas and histories. Carlo is the President of GIAA and married to Mara Lesemann.

J. Dolan Byrnes* (Jack Sanders) is a New York based actor.  Recent credits: Charles Peters in Don’t Stand Up! streaming soon at the Hartford Fringe Festival, Harry Truman in Give ‘Em Hell Harry, Mark in Melting the ICE, and Nikolai in The Long Way Home.  He is two-time recipient of the Outstanding Actor Award from Planet Connections Theatre Festivity for his roles in what do you mean and When The Party’s Over. Dolan is a member of Articulate Theatre Company.

Stark Wilz (stage directions reader) is a musician and singer/songwriter, as well as actor, poet and writer in New York City who hails from the Midwest and spent his youth acquiring culture and education in America and Europe. His music and political musings are widely available on iTunes, Spotify and Amazon, as well as a host of other platforms.

Ego Actus (production company) is Latin for “My Way.” Joan Kane and Bruce A! Kraemer created an independent theatre in company in 2009 dedicated to doing art for art’s sake. Joan directs, Bruce designs, and we both produce. We have done shows at 59e59 Theaters, Theatre Row, HERE, Theater for a New City, Urban Stages and in Edinburgh and Prague. We are affiliated with the League of Independent Theater and Fractured Atlas. We consider this series to be our 50th production. Please see http://egoactus.com/plays/survival-is-insufficient/

To RSVP, please go to https://us02web.zoom.us/meeting/register/tZUlcOytqD0iGtDFHi4nuiTRa5VkL-nVavzG

Gary Morgenstein’s A TOMATO CAN’T GROW IN THE BRONX