I WITNESS, a new play by David Grand 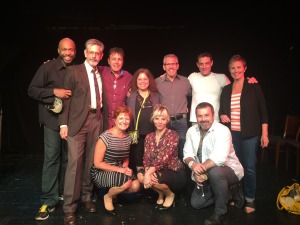 A developmental reading of the play I WITNESS was performed at 13th Street Repertory on Saturday, August 23rd.

The play is based on real people and their actual stories during and following the attack on the World Trade Center on September 11th, 2001.  I performed the role of Sheila, an escapee of the North Tower and Evy Mathis, a news reporter.

The trauma therapy method depicted, Brainspotting, is an internationally recognized brain-based method used to heal hundreds of survivors of 9/11 and other natural and man-made disasters, as well as traumatic experiences of child and adulthood. Information on Brainspotting is available on the author’s website: www.brainspotting.com.

The talk back session with the audience was not only moving and inspirational, but also informative.  Truly a one-of-a-kind experience and grateful to have been a part of the creative process.  It was an honor to work with such a talented and devoted cast, director, and producers.

Gary Morgenstein’s A TOMATO CAN’T GROW IN THE BRONX

All About Image/We Are The Elite