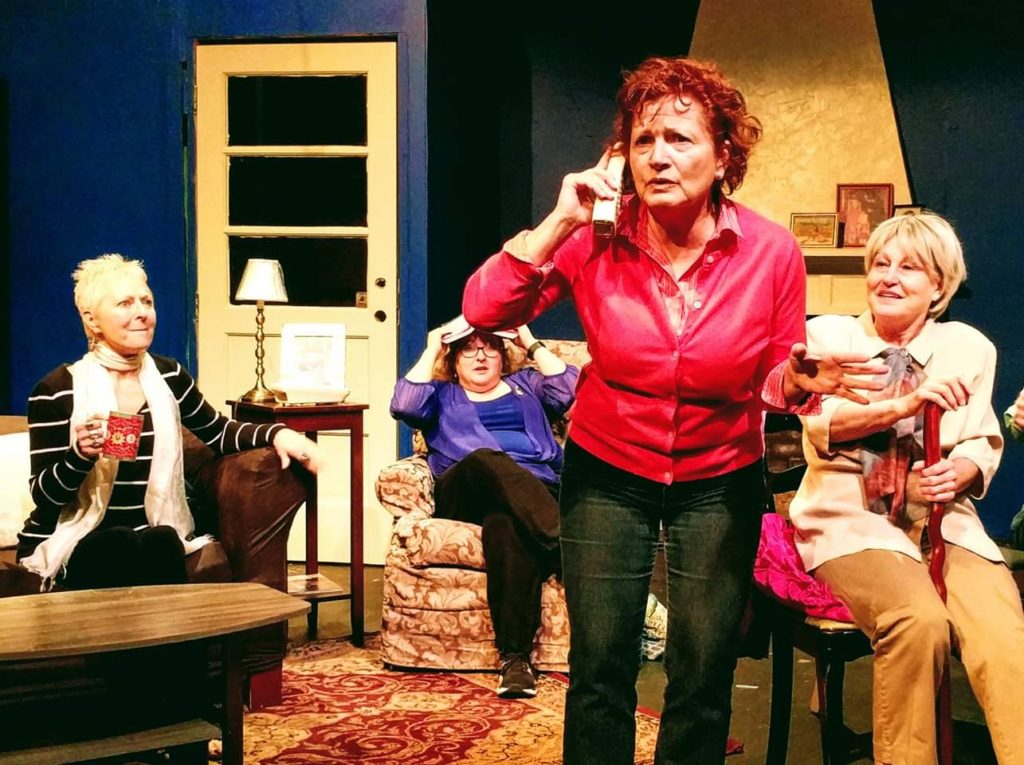 Our protagonist is played to authentic perfection, down to the just-right Bronx accent and lilt of a seasoned day-drinker, by McGarry. Her throughline is natural no matter what wacky situations or daring costumes she is put into.

In the words of George Michael, “Sex is natural, sex is good. Not everybody does it, but everybody should.” And some people find it lucrative to do it over an untraceable phone attached to a PayPal account in order to pay the electric bill.   Making its Connecticut debut, the Ridgefield Theater Barn’s first offering of its 53rd season, Old Ringers, by Joe Simonelli, finds women of (mostly) an advanced age in that very spot, to often absurd outcomes.    When Diane (Frances McGarry) finds her Social Security check drastically diminished, a wrong number to a sex hotline opens the door to an adventurous financial opportunity. Joined by her friends–the frisky Verna (Linda Seay), the trepidatious Kathy Ann (Stefanie Rosenberg), and the sensible Rose (Laurel Lettieri)–and her carefree boyfriend Harry (Mark Rubino), Diane and the group must navigate worldly challenges and personal discoveries while maintaining their sense of humor and avoiding the judgmental gaze of Diane’s pious daughter Amanda (Sarah J. Ahearn) and a roving Detective Rumson (Joshua Adelson).   The playwright defines these characters through, at times, heavy handed dialogue and slapstick-driven motivations, but the actors bring humanity and genuineness to such two-dimensional archetypes with guidance and adjustments from director Carol Dorn, who freshens the material a bit for the present era of technology, sex positivity, and elder visibility.

Our protagonist is played to authentic perfection, down to the just-right Bronx accent and lilt of a seasoned day-drinker, by McGarry. Her throughline is natural no matter what wacky situations or daring costumes she is put into. McGarry is matched in energy and ease by Rubino as Harry (who has some fun costuming moments of his own).    You could not ask for a better trio of friends than Diane’s to join her on this romp. Verna’s cliche “tramp” label was navigated well without unnecessary over-sexualization by Seay (who somehow did not come off as intoxicated despite double fisting a flask and a screwdriver. Impressive.). Lettieri’s Rose emanated grace and maturity (and a convincing bum hip), especially when espousing the customary “old lady wisdom,” despite the actress being no senior citizen.   Simonelli’s characters have some clunky and immediate transitions to make, and the cast worked diligently to make them seamless. Rosenberg’s Kathy Ann telegraphed her coming out moment from her first line, however, her distinct voice and pacing shifts were necessary for her bombastic reveal and she thrilled audiences in the process. Ahearn’s Amanda had to do some equally difficult personality gymnastics with the introduction of Tony Rumson, a detective played by newcomer to the craft Adelson. Ahearn jockeyed between over-wrought, teetotaling Christian and relaxed, inebriated flirt with speeds to induce whiplash. Adelson’s depiction of Rumson was a bit of a paradox as the actor’s earnestness clashed with the character’s reported bravado. For an acting debut, he rose to the occasion.

Indicated by the pre-show music, this world of women was raised on Diana Ross, Lesley Gore, and Sonny and Cher in the sexual revolution 60s, and came of age in the self-improvement 70s. That these ladies would be so hung up on the morality theories of others was a convenient if implausible plot device, and the use of the detective as the literal as well as figurative voice of the law fell flat. Someone needs to tell these folks to relax: as long as everyone’s over eighteen years old, phone sex hotlines are not illegal. Sorry Tony.   Setting the actual stage, kudos to set designer and builder Nick Kaye. The verisimilitude of the Bronx abode was not only impressive to behold, but grounded the farcical nature of the action in a world that could be realistically inhabited, and where the coffee was hot enough to see the steam from the last row. While the comedy benefits from the low-hanging fruit of scantily- (or comically)-clad seniors, costume designer Will Heese outfitted each character in garb that fit personalities and situations naturally and completely (although Kathy Ann could use a longer coat to support her character’s presented modesty, as her costume is still visible to the audience and cheats the reveal a little).

This is a show to take advantage of RTB’s cabaret style seating. Bring your favorite noshes, libations, and snacks to marvel at the riotous and resolute journeys these seven characters take. This brassy offering is anything but subtle as it raises laughter the to the rafters from sold out audiences.    Old Ringers runs until February 23, 2019 at the Ridgefield Theater Barn, 37 Halpin Ln, Ridgefield, CT, 06877. Doors open one hour prior to curtain, which is 8PM evenings and 2PM matinees. Tickets are $35 for adults, and $28 for seniors, students and veterans, and available at ridgefieldtheaterbarn.org or by calling the box office at 203- 431-9850. For more information, email  info@RidgefieldTheaterBarn.org.

Previous Post
Theater Review: Theater Barn Cast Definitely Not Phoning It In
Next Post
All About Image/We Are The Elite